A rich and sensual combination of hazelnut and chocolate. There’s more to gianduia than you think.

There is so much to say about gianduia, even though the idea is simple. When you think of Italy, what do you think about? Perhaps the rich history stretching from the Roman Empire and the Etruscans? Maybe the great period of the Renaissance? This is when art, science and political theory began to shape modern day Europe. Did you know that a flavour could be shaped by history?

Gianduia, or gianduja is a type of confectionery. The Northern Italian town of Turin was its place of invention. You make it using high quality cocoa and hazelnuts. To give extra flavour, you toast these hazelnuts. Chocolatiers use the mixture as a filling for pralines or chocolate bars.
Gianduia is also found as a spread. Yes, it was the inspiration for a worldwide brand of chocolate-hazelnut spread. Of course, this also has its origins in Turin. Visitors to Gelato Village will know that it makes a delicious gelato too! All the regions of Italy have adopted the flavour of gianduia in their gelato. It is a very common flavour across the country. 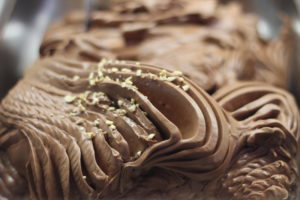 Where was gianduia invented?

During the Napoleonic Wars, Napoleon banned trade with Britain and its colonies. This had big implications for Italy’s love of chocolate! Several of the British colonies in West Africa grew cocoa. Napoleon’s ban made chocolate more scarce. With so little raw material available, how could chocolatiers stretch it out? The question remained, with such a demand for chocolate, but only so much available, how could chocolatiers make it stretch further? They looked to the produce of their own region for the answer.

The answer was all around them. Hazelnuts. Combining chocolate with crushed hazelnuts helped the chocolate available to go further, and made a delicious flavour! Hazelnuts in the Piedmont region, where the founders of Gelato Village are from, have a delicate flavour. They have Protected Geographic Indication status. They are grown in the regions of Cuneo, Asti and Alessandria. This area was included in the UNESCO list of World Heritage Sites in 2014 because of the nuts and of course, the wine. The confectionery industry uses almost all of the hazelnut crop. They have a sweet tooth in Turin!

Gianduia became even more popular during WWII. Rationing meant that chocolate was scarce and so again the gianduia recipe was a way of stretching it out with local ingredients that were abundant.

What is special about chocolate in Turin?

Turin is the spiritual home of chocolate in Europe. Gianduia’s invention is just the tip of the iceberg! Turin boasted the first hot chocolate being served at the first chocolate house in 1678. In the late 18th century, the Torinese developed the first filled chocolates, the ones that are most familiar to us today in boxes. This is the form the first gianduia took.

One of the most common forms of gianduia you find is the giandiuotto. These little golden wrapped chocolates are filled with cocoa and chopped, roasted hazelnuts. Delicious! They were first created by Michele Prochet in 1852. In, you guessed it, Turin. This city still produces over 40% of Italian chocolate.

How did gianduia get its name?

Gianduia is the name of a colourful carnival character. It is accepted to be a contraction of the Piemontese name ‘Gioan d’la Duja’. This means John of the Jug and referred to the tankard carried by the character. This character was used in 19th century political satire as a character representing Turin. The character’s long affiliation with the city made it a natural choice for a Torinese-invented chocolate.

Gianduia was a character in the Commedia dell’arte. This is an old form of Italian theatre. The audience watches familiar ‘types’ of characters that are shown by actors in masks. Gianduia was an honest and faithful Piemontese man of the countryside. His key characteristics are his admiration for wine, food and good company. He is full of fun and laughter. The character began life as a puppet and then developed into a character played by an actor in the theatre.

Gianduia became the King of Carnival in Turin. In 1861 Turin was the seat of government for the new Kingdom of Italy. A group of citizens formed the ‘Society of Gianduia’. Their aim was to improve and expand the city’s celebration of Carnival. Unfortunately, this group faced disruption from political upheaval. There was four years of civil unrest and government left the city, But the Society was waiting. In 1865, Turin was finally able to celebrate its revamped carnival. The image of Gianduia’s popped up everywhere in the promotion of these events, and even songs developed celebrating him. The people of Piedmont see themselves as the Giandujot. They are the children of Gianduia. Full of fun and celebration – just like we want our gianduia gelato to be!