We are halfway through the international festival of artisan gelato that is Sherbeth. The streets of Palermo are packed with thousands of people enjoying some of the best gelato in the world. 50 Maestri Gelatiere from all over the world have assembled in Sicily to share their unique expressions of flavour. This includes Leicester’s very own fantastic Gelato Village. 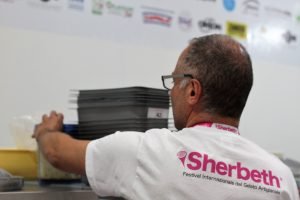 The long, narrow streets of Palermo are alive with locals and tourists alike. Their palates are being tantalised by a range of global flavours. Sherbeth is one of the biggest artisan gelato festivals there is, dedicated to traditionally produced, natural gelato. Each morning, the gelatieri from 9 different countries take their shift in the temporary Gelato Laboratory to construct the day’s treats.

Read more at The Extreme Housewife

The heatwave shows no sign of ending so to bring our temperatures down a bit, we headed to an ice cream parlour in the St Martin’s area of Leicester city centre. Gelato Village came to Leicester in 2014 but it’s taken us until now to discover the place, better late than never I guess.

The trip to Leicester was an impulse – something to do with the heatwave, and meeting Antonio De Vecchi and Daniele Taverna in Turin. All we talked about in Turin was food, and their passion was gelato…so much of a passion that they started Gelato Village in Leicester, England.

I’d never been to Leicester. Now I had two reasons to go.

Read more at The Phraser

If you’ve been wowed by the sweet treats at Leicester’s Gelato Village, then you won’t want to miss the second annual Gelato in the Square festival later this year.

Taking place on October 27 and 28, the event will feature some of the best gelato makers in the world – and some pretty amazing gelato.

Gelato Village are using their network of international contacts to bring six of the biggest names in gelato to their St Martin’s Square gelateria.

The maestri gelatieri will be creating unique recipes in the on-site laboratory, crafting bespoke gelato that represent this year’s theme, ‘Gelato: A Unique Flavour Journey’.

“Here at Gelato Village we are dedicated to using the best quality seasonal ingredients” said Daniele Taverna, one of the Leicester shop’s co-owners.

“We have rigorous quality checks in place to make sure that the gelato makers we invite to Leicester meet our high standards so that our Leicester community can enjoy something new and inspirational during the event.”

Read more at the Leicester Mercury

Then Antonio got in contact…he and Daniele run Gelato Village in Leicester…..my favourite geleratia outside of Italy. I’ve written about them in the past here

Antonio hasn’t made damson sorbetto before but thought he might like to try. So on Monday I put three kilos in my wicker basket and dropped them off at the geleratia, only a few minutes walk from work.

The next morning I received a call. “It’s ready ” said Antonio, and I could tell he was pleased with the flavour when he sent this tweet.

Read more at Thinking of the Days

If you live in Leicestershire, then there’s a good chance that you’ve heard of Gelato Village.

And if you’ve ever tried their award-winning gelato for yourself, there’s an even bigger chance that you thought it was delicious.

The St Martins shop was opened by Daniele Taverna and Antonio De Vecchi in 2014, after they spotted a gap in the market in Leicester.

Hailing from Turin in Italy, the pair have since won lots of fans in the city, as well as earning national and international praise.

Striving to create the most authentic gelato you can get your hands on outside of their homeland, the pair source their ingredients one by one for seasonal creations that include ricotta and apricot and mango lassi.

But while it’s no secret that the shop is probably the best place to try the treat in Leicester, have you ever wondered how they make it?

Read more at the Leicester Mercury

Leicester’s only authentic Italian gelato is made fresh in-store every day, using only natural ingredients, including non-homogenised milk from the Belvoir Ridge Creamery near Melton Mowbray.

The daily-changing flavour selection includes the likes of pistaccio, tiramisu, and Richard III (rose blossom and fruits of the forest).

“Alice was a local working class hero who campaigned tirelessly in Leicester to improve working conditions in the Boot & Shoe Industry and to gain women’s suffrage” said Daniele Taverna, co-owner of the Leicester gelateria. “The least we can do is name a gelato for her”.  Gelato Village have selected a white chocolate and lavender gelato to simply name ‘Alice Hawkins’.

“The colours of the gelato – purple, green and white – are the same as the colours used by the Women’s Social and Political Union” said Daniele. “These would have been the colours of the sash shown on the newly unveiled status of Ms Hawkins in Market Square”.

This is not the first time that Gelato Village have immortalised significant local figures in gelato.  A Richard III gelato, made with rose blossom and fruits of the forest ripple has been available since the gelateria opened in August 2014.  The Gelato dei Campioni, which celebrated the historic Premier League victory of Leicester City Football Club in 2016, was ‘retired’ in February 2017 when Claudio Ranieri was sacked by the club. 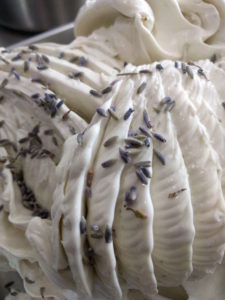 Mulled wine, apple juice, canapes and mini treats from Gelato Village were also available for skaters to feast on.

« 1 2 3 4 5 6 … 8 »
We use cookies to ensure that we give you the best experience on our website. If you continue to use this site we will assume that you are happy with it.OK