Stracciatella is one of the most popular types of gelato in Italy. It has been well loved since its invention in 1962 because of its unique combination of taste and texture.

The word stracciatella means ‘torn apart’ in Italian. In Italian cuisine, stracciatella was originally a kind of soup that comes from Rome. Whisked egg with parmesan is poured slowly into hot chicken broth that is continuously stirred. This creates shreds of egg that run through the soup. This concept inspired Enrico Panattoni of Bergamo, which is north-east of Milan. He used the same technique in 1962, but using Fior di Latte gelato and pure melted dark chocolate. This created a bright white gelato, cut through with tiny shards of chocolate. 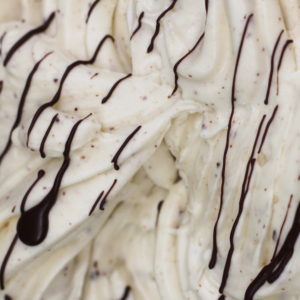 Stracciatella is one of the most technically difficult gelati to execute correctly. When the melted chocolate is slowly poured into a vertical batch freezer, the contact with the cold gelato immediately sets the chocolate. The sudden change in temperature tempers the chocolate, giving it the unique ‘crispy’ temperature. The continual churning breaks down the tempered chocolate so that you enjoy hundreds of small crispy shards in every bite! If the process is not done correctly, the chocolate will melt slightly into the gelato, giving a slightly brown colour and ruining the texture.

How we make stracciatella at Gelato Village

Sadly we do not have a traditional vertical batch freezer here at Gelato Village. This is a source of much heartache for our Maestro Gelatiere, Antonio De Vecchi. The tempering of the chocolate is much more accurate using a vertical machine and less prone to unexpected errors. One day we will be able to afford one for him! Antonio had a lot of fun making stracciatella in a vertical machine at the Cheese festival in Bra, Italy in 2017.